Hallways is the debut album from Oklahoma singer/songwriter Ken Pomeroy, and is released November 2nd 2018 via Tulsa’s Horton Records. Ken is a 15 year old Oklahoma singer/songwriter with a rootsy Americana sound. Transcending her age, Ken has a unique vocal quality that blends smoothly with her heartfelt lyrics. Ken began singing, writing songs, and playing the Baritone ukulele at age 9. She quickly learned to play the Concert and Soprano Ukulele, and at age 10 began playing guitar. “Hallways” is the next milestone in her career, which is sure to gain additional attention for this award winning

artist. On “Hallways”, you’ll hear a great deal of confidence in her playing and singing. Her voice is an instrument unto itself, with the ability to weave a tale with all of the right phrasing and delicacy, before forcefully making a point. Her finger-style guitar playing makes for a dynamic listen, while not falling into the trap of many strummers in this genre. Lyrically, she displays the mark of an old soul, with depth that typically comes from many more years on this earth. Ken is already garnering awards and accolades at her young age. In 2016 she advanced through state and regional competitions, to perform her 9-minute piece on Woody Guthrie on the National History Day stage in Washington, D.C. That same year, Ken won the Rising Star Award from the Songwriters Association of Norman. Early this year, ‘The Sidewalk Song’ won the inaugural Jimmy LaFave Songwriting Contest at Bob Childers’ Gypsy Cafe in Stillwater, OK. The lyric, as described by Ken, “says anyone who is down on their luck, can turn it around and walk down that sidewalk they were sleepin’ on before”. This positive and supportive message, and Ken’s performance, obviously hit home as it was selected by a panel of judges that included Eliza Gilkyson and Carter Sampson. 2018 has been a bit of a whirlwind, with a performance at Mile 0 Fest in Key West, FL (a who’s who of country & red dirt musicians) to start the year, followed by multiple showcases at Folk Alliance International. Shortly after that, Ken was invited to play with Wanda Jackson in her home state, before finishing off her summer shows with her own set at the prestigious Woody Guthrie Folk Festival….and now, to cap everything off, the release of ‘Hallways’. Whew, what a year.

AND THERE STAND EMPIRES – self-titled (CD) 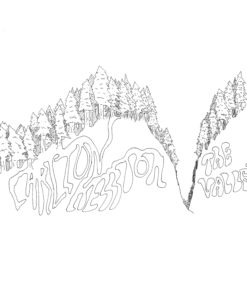